Why is it so hard to allow women the kind of labour they want? By Catherine Bennett 23.11.2019

Decades on from the resurgence of a woman's right to have a natural birth, and the reality is still that women are often not given the full information to make a truly informed choice.

That “the journey down the birth canal is the most dangerous any of us will ever undertake” used to be a favoured saying among the more sententious sort of obstetrician. The maxim was unlikely, as they must have known, to inspire much confidence in the birth process, definitely not if left to its own devices.

Probably because of another implication – that bow-tied male physicians were at least as vital to the weaker sex’s labouring performance as traffic police are to motorways – the journey analogy has been eclipsed by the more empowering mantra of “pregnancy is not an illness” and assurances, originating in the natural childbirth movement, that – done right – the act of giving birth could be a transformatively rewarding, even “psychosexual” experience. The quality of joy seemed to depend, particularly, on how successfully the labourer had escaped medical intervention, from pain relief to induction. Checking out the NCT advice after a good two-decade gap, I discover that, although “natural” in childbirth seems at some point to have been replaced with the less contentious “straightforward”, the organisation’s belief in the superiority of intervention-free birth appears undiminished since the late Sheila Kitzinger first communicated the ecstasies that clinicians had suppressed.

Among the benefits of “straightforward” delivery itemised by the NCT are “you are more likely to feel satisfied with your labour” and “less likely to experience psychological problems like depression”. It notes that there are no guarantees on how to achieve satisfaction, though for low-risk mothers “your own comfy home or a midwife-led unit are strong options”. Even in the comfiest of homes, the NCT admits, “there is a slightly increased risk to your baby”.

The degree to which NCT precepts have been normalised was clear when Kate, Duchess of Cambridge, emerged, the third time, from hospital, to renewed tributes to her exemplary ability to enter a ward, deliver a healthy child minus analgesics and leave groomed and in heels, in an unbloodied dress, within 45 minutes, give or take. Mail headline: “11 hours’ labour and all natural! How serene Kate sailed through a textbook delivery as she goes through the perfect birth she was hoping for”.

Once its anti-patriarchal origins are forgotten or dispensed with, the philosophy of natural childbirth campaigners has obvious attractions for NHS cost-cutters and for anybody convinced, for whatever reason, that women have, as per, been making a fuss about nothing. In their aversion to elective caesareans, these disparate groups have found something around which they can all unite. More generally, where once unlucky mothers encountered an authoritarian determination to medicalise childbirth, recent reports indicate an occasional hostility towards intervention, which could, in extreme cases, be at least as damaging. The recent investigation into avoidable deaths at Furness hospitalbetween 2004 and 2013 uncovered, among its horrifying failures, a determination among midwives – known as “the musketeers” – to pursue “normal” childbirth “at any cost”.

Now the leaked provisional report into multiple deaths in Shropshire and Telford hospitals says it was “inadequately” investigated by the Royal College of Obstetricians and Gynaecologists (RCOG) in 2017 and identifies, among other failures detailed in the Independent, “a long-term lack of informed consent for mothers choosing to deliver their babies in midwifery-led units – where risks can be higher if problems occur – which ‘continues to the present day’”.

Perhaps a suspicion of intervention, along with occasional fetishisation of natural/straightforward birth, also helps explain what is otherwise mystifying: that only now, after a major Swedish study, suspended after researchers concluded its continuation was unethical, is it confirmed that leaving induction until after 41 weeks is associated with an increased number of stillbirths.

There will always, of course, be some women for whom the possible prize of a “straightforward” birth cannot outweigh the substantial, extensively documented risks of vaginal delivery or even the ignominy freely associated with its alternative, an elective caesarean. To the consternation of sections of the NHS and the World Health Organization, this demographic is growing. “Worldwide,” says the WHO, “caesarean section rates have been steadily increasing, without significant benefit to the health of women and babies.” It seems plain to them that this particular expression of female preference must be utterly deluded. Swimming pools? Yes, lovely. A considered disinclination to risk urinary or faecal incontinence, vaginal tears, PTSD or, above all, stillbirth? Mad. Maybe the WHO should rethink its factsheet on maternal mortality (810 a day globally): it can only encourage unhelpful, caesarean-affirming reflections on human design flaws.

Supposing this development can be partly attributed, as sometimes alleged, to consultant/husband convenience or lawsuit avoidance (which might alone say something about relative risks), the WHO does at least acknowledge that women are, in defiance of holy writ, refusing to consider childbirth a white-knuckle ride, acute pain as incidental and their bodies as collateral damage.

What, it wonders, can be done to stop these mothers concluding that medical science can offer, in childbirth as elsewhere, a radical improvement on nature? The popular allegation, “too posh to push”, has proved ineffectual. The WHO prefers correction by “educational interventions” or failing that – possibly inspired by some abortion arrangements – “requirement for second opinion”. 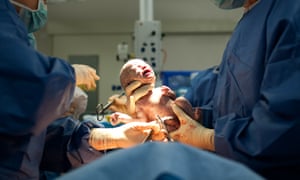 Advice from the UK’s RCOG is similarly of the view that planned caesareans being, for no obvious reason, wronger than home births, women who ask for them (though presumably not the third of female obstetricians who do so) are similarly wrong, possibly mentally unwell. Addressing women choosing a planned caesarean, it runs through the risks, but not so you’d realise that most obstetricians believe vaginal delivery to be more dangerous for a baby. You may, it kindly suggests, have “tokophobia” (extreme fear of childbirth). No, mate. Though you may have overactive paternalism.

And that guidance preceded the latest revelations about maternity care failures. Going for a vaginal delivery? Then you probably know the physical risks. But are you familiar with prevailing childbirth ideology at your chosen provider?

• Catherine Bennett is an Observer columnist